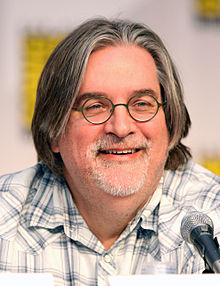 Matthew Abram was born February 15, 1954) is an American cartoonist, writer, producer, and animator. He is the creator of the comic strip Life in Hell and the television series The Simpsons, Futurama, and Disenchantment.

Matt Groening has won thirteen Primetime Emmy Awards, eleven for The Simpsons and two for Futurama as well as a British Comedy Award in 2004. In 2002, he won the National Cartoonist Society Reuben Award for his work on Life in Hell.

Groening sold the concept of Simpsons for James L. Brooks (an American director, producer, and screenwriter) office and sketched out his version of a dysfunctional family: Homer - the overweight father, Marge - the slim mother, Bart - the bratty oldest child, Lisa – a intelligent middle child and Maggie - the baby. Groening famously named the main Simpson characters after members of his own family.

Tell us what you think

In the visual arts in particular pain...

Java is a general-purpose computer-pr...

VFX is the processes which imagery is cr...