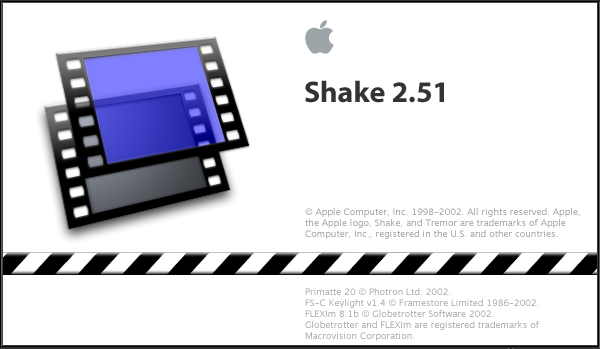 Shake is a discontinued image compositing package used in the post-production industry developed by Nothing Real for Windows and later acquired by Apple Inc.

In 1996, Arnaud Hervas and Allen Edwards founded Nothing Real, and released Shake 1.0 as a command-line tool for image processing to high-end visual effects facilities in early 1997.

Shake is widely used in visual effects and digital compositing for film, video and commercials. What made Shake unique when released was its node graph architecture graphically. This enabled complex image processing sequences to be designed through the connection of effects "nodes" in a graphical workflow interface.

Shake has been used in films such as; The Lord of the Rings, King Kong, Harry Potter, Cloverfield, Star Trek Remastered, War of the Worlds, Star Wars: Episode III – Revenge of the Sith, Fantastic Four, Mission: Impossible III, Poseidon, The Incredibles, Hulk, Doctor Who, The Dark Knight and Pirates of the Caribbean.

Tell us what you think

In the visual arts in particular pain...

Java is a general-purpose computer-pr...

VFX is the processes which imagery is cr...